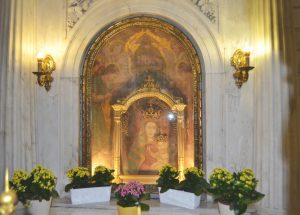 Sanctuary Madonnina today is certainly the most famous church in Castellazzo.

In 1947 Pope Pius XII, through the highest papal document, the papal bull, declared St. Maria Della Creta the motorcyclists patroness saint. Every year, since 1946, every second Sunday of July, a spectacular international meeting of motorcyclists takes place. Motoryclists from all over the world come to take part in this religious festival. On the occasion of this event the church’s doors are open to motorcycles . Inside the church, along the passage, there are many votive paintings, which are a testament to long-term humility to St. Maria Della Creta.

The first pilgrimage building was a chapel, in which the image of the Holy Virgin from the sanctuary in Creta (located on the “Mons Cretae”, approx. 20km from Casale Monferrato) was stored. It was built by 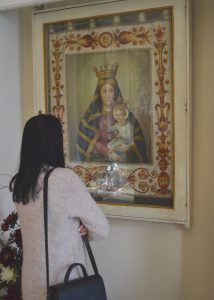 Giovanni Viola from Castelazzo, in 1631 after a plague epidemic that hit the whole of Europe. In 1764 the chapel was totally

destroyed as it was abandoned and therefore only ruins remained. Once deserted, the area began to be re-settled and the place where once a chapel stood remained for the inhabitants of Castellazo a holy place. The place was originally worshiped with the use of votive paintings.

Shortly afterwards a wooden cross was erected, then a pillar of  Madonna Della Creta, which quickly soon and in an incomprehensible way, was adored by people (even when the image returned to S. Carlo, to its original place in which it were stored). Shortly after that a small church was built, which was also destroyed (years 1802-1848). Then around the pillar a round square and a small chapel was built. It was not until the late nineteenth century when a proper sanctuary was built. In 1905 the main sanctuary was built and opened, and in 1924 the facade of the sanctuary and bell towers were completed. Construction work, which took place at the end of the last century, were carried out by the architect Giuseppe Boldi Trotti and were based on plans drawn up by the architect Caselli of Alessandria. The facade, however, is the work geometrician Girolamo Buscaglia.